We officially moved to Boston in May, meaning we’ve been living in Beantown (is that a thing?) for almost 4 months. And we love it. There are a few things we miss about NYC, but so many more things that make living in Boston perfect for us. For example:

NYC has way better public transportation. The NYC subway system is one of the best. It’s extensive, fairly reliable, and people (generally) understand how to use it. After living in the city for a few years, we were expert level subway takers. We knew which trains to avoid (the GODDAMN L TRAIN), where to stand on the platform to minimize underground travel, and how not to get in the empty car during rush hour because there is a reason it’s empty. Boston’s T system… well it’s there. I take the Red Line to and from work every day and while that works out pretty well, it’s not always very straightforward to get from A to B. Stations are fewer and farther between and trains don’t run as often or as late. It blows my mind that the public transportation system shuts down at night! Also “inbound” vs. “outbound” is a dumb way to signify which direction a train is going. My commute is “inbound” in both directions. Um, what? What’s so wrong with uptown/northbound/eastward/some normal indication of where this train is headed? Also no one seems to have any sense of urgency or logic when boarding. Why does it take so long? This train isn’t even crowded? What are you waiting for?

But Boston’s Uber network is money. There are very few instances where it makes sense to take an Uber in NYC. If you can’t get a taxi by just waving your arms on the sidewalk, chances are that’s because there’s high demand (anyone going to dinner at 7pm across town ever can confirm) and the Uber surge pricing will be through the roof. It’s also more expensive and less convenient (probably 3-4 cabs will drive past you while you wait for the Uber driver to find you). But in Boston, where the streets are windy and oddly named and you can’t just say you’re going to the intersection of 73rd and Columbus and there’s never a taxi when you need one and their credit card processors are always out of service? Uber is key. It’s so easy. Also the city proper is incredibly walkable, especially when the weather is nice. 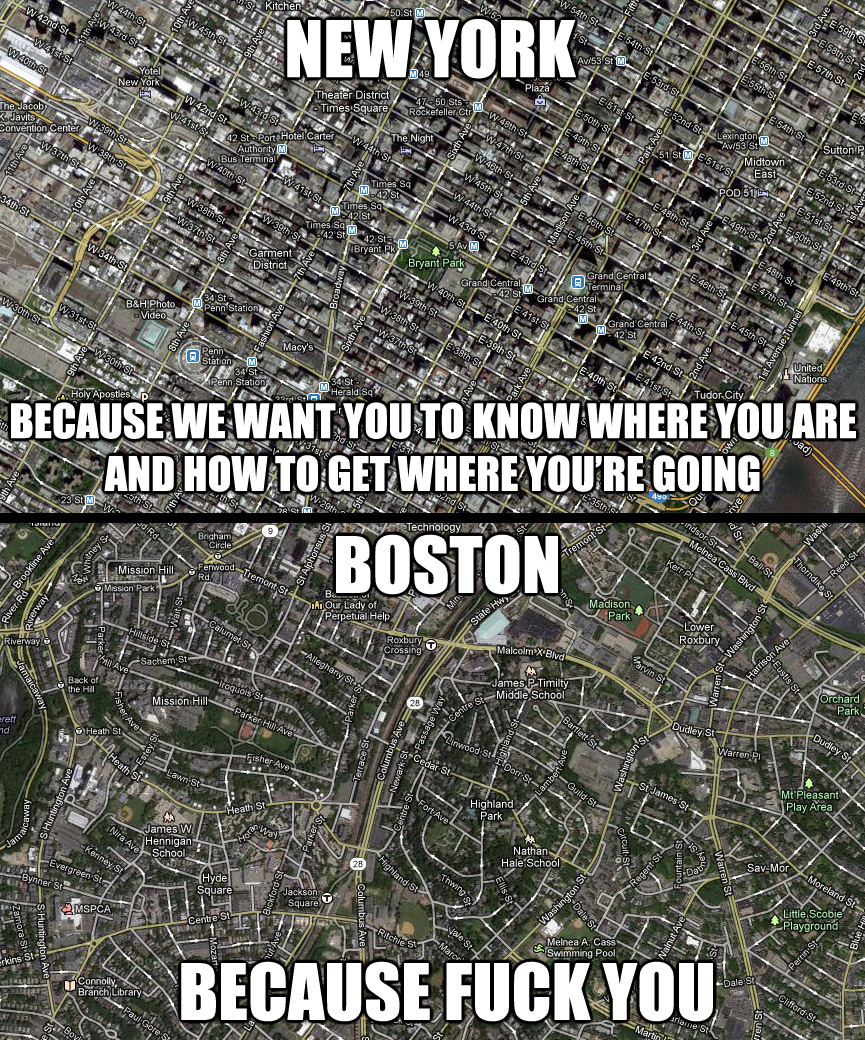 Another thing I miss: the NYC tap water is clean and fresh and makes the best bagels and hot dogs in the world. It’s weird, but yeah, I miss the water in NYC. It tastes great and boiled foods always turn out better and I don’t know what it is, but Boston’s water is strange. We tried staying on top of Brita filtering our drinking water but that’s not sustainable when you’re a normal person, so we just drink it from the tap and suffer the weird flavor.

But the fridge in our Boston apartment has an ice maker, and ice water does taste a bit fresher. An ice making fridge in New York is a rarity, at least from my experience. Enjoying at home iced lattes on summer mornings without having to deal with ice trays is a dream.

My NYC colorist, nail salon, waxer, brow shaper…. I got pretty loyal to the team that makes me feel beautiful during my four years in NYC. That and the fact that there’s a Sephora every 20 blocks or so (more if you’re anywhere near Times Square) and they carry all of the new launches and high end lines. There are TWO Sephora’s in ALL of Boston. Do you know what that means for someone who is not embarrassed to admit that Sephora is her Happy Place? And I have yet to find a salon I truly trust with my tresses. Which is probably why I’m more than 2 months (and counting) overdue for a trim.

Boston does have an Ulta. And several Targets.  (And Boloco. That’s not really related but it’s definitely a plus.)

Other things that give Boston the advantage: We can have a car. We can escape to beach or up to the mountains to ski pretty much any time we want. Amazing summer weather. Harpoon Brewery. A bedroom that fits a proper bed with room to walk all the way around it. Being able to afford to live in a building with a gym and laundry and package concierge. Going to free events without having to show up 6 hours early. Not having to wait in line TO GET IN TO THE GROCERY STORE. Not being woken up by sirens or noisy trucks in the middle of the night. AMC Assembly Row. A 10 minute drive to the airport. Walking next to a river… er, walking next to a river that doesn’t smell like poop. And no pigeons. Or at least very few.

We do miss our NYC friends, the few restaurants we found and loved, and being able to go back to the places we visited on our first few dates, but we’re so happy living in Boston so far. Let’s hope the feeling doesn’t fade when we’re under four feet of snow!

This error message is only visible to WordPress admins


Error: There is no connected account for the user 19063332 Feed will not update.